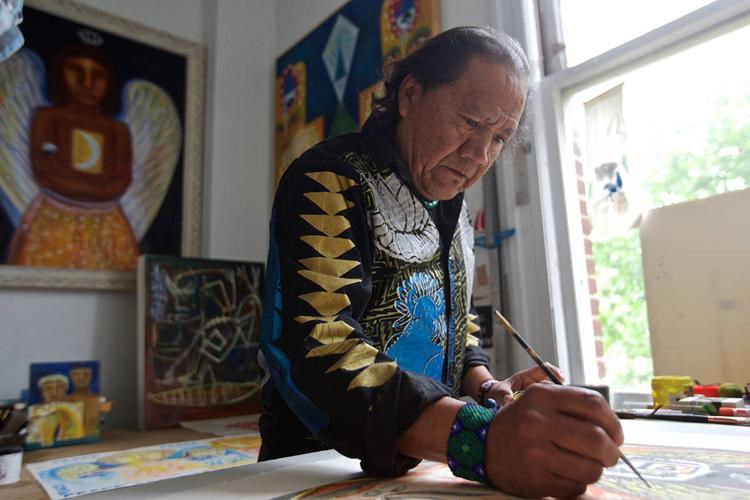 Artist Calixto Robles in his studio at the Redstone building in the Mission District on Thursday, May 9, 2019. (Kevin…

“To any artist, the light is important,” said printmaker and painter, Calixto Robles. “I like this studio because of the light.”

Earlier this year, as he was preparing for four exhibits, Robles was forced to vacate his workspace in the Potrero design district on short notice. But what could’ve easily become another artist out-migration story found a happy ending at the Redstone Building, the historic former labor temple on 16th Street that provides shelter from the storm of gentrification for its tenants.

“I’m lucky,” said Robles who’s lived in The City since 1983 and has worked in the arts since 1986. “I had a friend who told me of a space here,” he said. But then, things often have a way of working out in the art of Robles’s life.

“Thanks to art I met my wife, Alexandra Blum. We have a daughter, Cecile, and I paint everyday,” he said.

Four years ago, when their Mission District home caught fire and the family was displaced, Robles took action and avoided worry.

”I’d wake up at three in the morning and just pray, it’s going to be fine, we’re going to go back. After two years and a half, we went back,” he explained. “You have to know your rights and you have to fight.”

Faith and resilience aren’t things that necessarily came naturally to Robles; rather they developed over time like his art which is loaded with powerful imagery, incorporating ancient and idigenous symbols for war and peace.

Growing up on his grandfather’s hacienda in Oaxaca, “I remember the colors,” said Robles.

“My grandfather rented rooms to people and I remember seeing this lady who worked with textiles, putting things in pots of water and then weaving with a loom,” he said. “Another guy made ceramic plates. I remember the fire of the oven.”

He admired the work of Rufino Tomayo, Diego Rivera, José Clemente Orozco, Marc Chagall and Wassily Kandinsky. “In Mexico, I was always painting. I was always reading books about art from Europe,” he said, though his family didn’t encourage his interests.

“They said you have to study business administration or law. I don’t know anything about business, but I finished school,” he said. Arriving in San Francisco, “I started working in construction and restaurants, Like any immigrant.”

He also started going to the library.

“I was reading about the Maya, the Aztecs, the Zapotecs and Mixtecs and started realizing, wow, we have a big culture.” In 1986, he discovered The Mission Cultural Center and learned the art of printmaking from René Castro.

“I had read The Aztecs had the eagle warriors and the jaguar warriors and I started using them as symbols of resistance against globalization,” said Robles. “Little by little, I started changing.”

In the early ‘90s, a group of artists from Mission Cultural were introduced to Carlos Santana.

“He was my idol when I was in Mexico,” said Robles who was invited with a handful of other artists to visit the guitarist at home to show and discuss their art.

“He complimented all of us for the colors and images and asked if he could buy some. Since that time, we visited him once or twice a year and he would talk to us about compassion and being grateful. I really liked the way he talked to us,” said Robles who began to expand the use of religious and spiritual iconography in his work.

“I started changing from jaguars and warriors to angels, lotus flowers and images of peace,” he said. He works without sketches, preferring to seize the moment.

“I just work the canvas. I prepare the screen, different designs. If it’s sculpture, I get the clay and start making forms,” he said.

His process has opened him to an ever widening sphere of influence. “A Native American friend, a guy from the Apache people, invited me to a drum circle. I said I know nothing about it and he said, no, come.” Robles has since attended a drum circle once a week for the last five years.

“It gives me so much inspiration and peace of mind,” he said. “It’s really beautiful. And it’s respectful of the earth, the animals.” His new work, much like his initial work with the jaguar and eagle, incorporates animal images, particularly buffalo, bison and owls. His canvases and prints are on view at the JCCSF until September 9 and at Back To The Picture Gallery until May 26. He also has pieces in a tribute to Emiliano Zapata, closing tomorrow at Puerto Alegre.

Whether showing in galleries, or hanging in homes and in places of business from the beaches to the Bay, the light Robles depends on for his life and art glows naturally through the work.

“I feel good when I’m doing my art because I think when people see it, at least for a second, their thoughts will be focused on peace and love and compassion,” he said. “These are hard times we’re living in right now. It’s important to do the right thing in difficult times.”

If You Go: La Frontera: Artists Respond to the US-Mexico Border

Denise Sullivan is an author, cultural worker and editor of “Your Golden Sun Still Shines: San Francisco Personal Histories & Small Fictions.” She is a guest columnist and her point of view is not necessarily that have the Examiner. Follow her at www.denisesullivan.com and on Twitter @4DeniseSullivan.

Red Sox take on the Orioles after Verdugo's 4-hit game