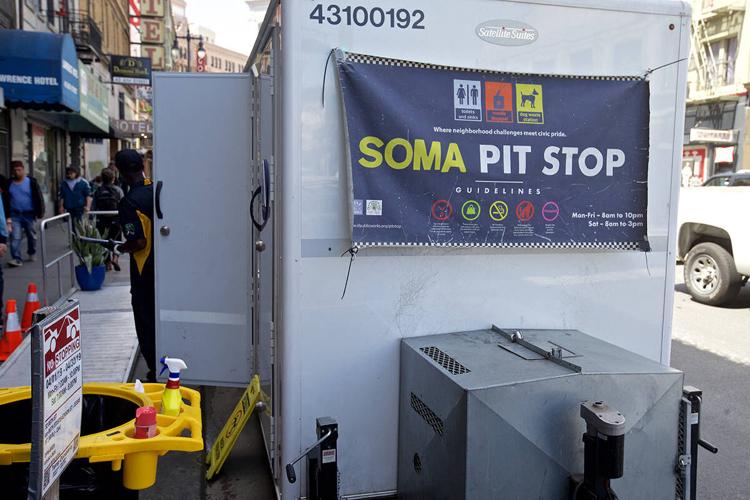 A month or so ago, I was heading to catch BART at 16th & Mission after a half hour Muni ride. I wanted to get home quickly, but I had another 25-minute BART ride, plus 30 minutes more driving and, well, I was reconsidering that beer I had just had with some colleagues.

Thankfully at the BART entrance there was a public bathroom fit for London. Its round curves, automatic door and shiny exterior were a welcome sight.

I queued up behind a woman already in line.

After a few minutes, the automatic door breezed open, and I relaxed a bit, knowing that she would quickly head in. But she did not. Sensing my confusion, she explained the process.

“He has to clean it,” she said, pointing to an attendant. I waited as he meticulously and thoroughly hosed down the tile floor which looked quite clean to me. Then, walking out, he closed the door behind him. And we waited some more.

The toilet is one of 25 “Pit Stops,” portable and semi-permanent public toilets in The City that include a paid monitor to keep them clean and prevent them from being used for sleeping, doing drugs, or worse.

The Pit Stop program started in the Tenderloin in 2014 after students in the neighborhood grew tired of dodging human feces during their walk to school. This will be my first look inside one, and I am feeling a sense of urgency beyond curiosity.

The door slid open again, and the woman in line went in.

When she exited, I headed for the door, but it immediately shut before I could enter. “It needs to clean for about 30 to 40 seconds, then you can go in,” the smiling attendant explained, more patiently than my bladder was feeling.

When I eventually entered I found a spotless floor, stainless steel toilet (seatless) and a sink. A sign inside said the door would open automatically after 20 minutes, another feature meant to keep the facility in line with its original purpose.

My little story of discomfort is not the point, of course. The point is that public bathrooms are the solution to an ongoing health and humanity issue that has been getting renewed attention as “poop maps” quantifying its magnitude spread across social media, grossing people out and embarrassing San Francisco. (Even as the motivation for some of these maps is questionable as Curbed San Francisco recently reported)

“We don’t want this to be the reputation of San Francisco,” says Rachel Gordon, a spokesperson for San Francisco Public Works, which is on the front lines of cleaning up the many ways people unfortunately trash The City.

It’s important that The City gets this toilet thing right.

The Pit Stop bathrooms are now a model for other cities and they seem to live up to the promise that “people can take care of their bathroom needs with dignity.” Having attendants — the hallmark of the program — also has resolved the filth and many other issues — as reported by Mission Local — that came with so-called “self cleaning” toilets.

But the program has its flaws. There’s simply not enough of them, especially if all wait times resemble the one I experienced. And, they are not open when arguably they are needed the most.

With only 25 Pit Stop toilets in 12 neighborhoods, and an estimated 25.1 million tourists visiting The City in 2016, and up to 7,000 people living on the streets, one need only do the math to understand the astronomical number of “code brown” complaints plaguing The City.

Last month in the Tenderloin district alone, the Clean Team there disposed of, and sanitized 2,628 instances of human and animal feces, according to the March 2019 stats reported by the Tenderloin Community Benefit District.

The Pit Stops are poised to eventually lower those numbers, but they need to be open all night.

All but one close before 8:30 p.m. with one open until 10 p.m. only on weekdays. And only three open as early as 7 a.m. In the majority of the neighborhoods the toilets serve, there is a full 12-hour stretch in which people living on the streets do not have access. Tourists and others, of course, can dine in cafes and bars that offer facilities, or talk their way into using a business restroom, something that is not so easy for those without a home.

The hours have expanded somewhat since the program started, but the $3 million annual budget has no room to increase hours further, Gordon said. And nighttime hours are more costly because, for safety reasons, there would need to be two paid attendants per pit stop, she said.

Let’s hope that The City supervisors do not step in it, so to speak, and fail to include money in the upcoming budget to expand this program, and get the toilets off what is essentially a 9-5 schedule.

Finding homes for those who do not have them is a complex issue, but solving the problem of human waste is simpler: Humans need toilets and they need them 24 hours a day.

Deborah Petersen is the editor-in-chief of San Francisco Media Company, which publishes The Examiner, SFWeekly and SFEvergreen. You can reach her at askeditor@sfmediaco.com.