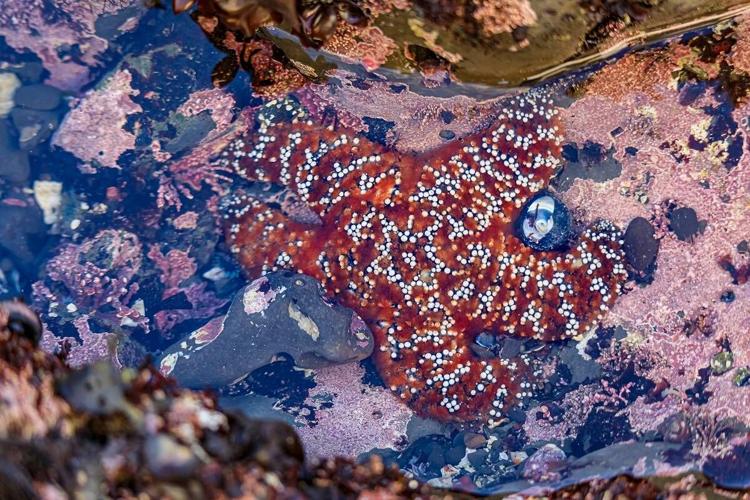 Starfish, dying from a mysterious “wasting disease” in 2013, have recently been piling up on local beaches, looking much better….

Starfish, dying from a mysterious “wasting disease” in 2013, have recently been piling up on local beaches, looking much better….

While San Franciscans are maintaining an appropriate 6-foot separation and avoiding crowds at the beach, our local sea stars aren’t following any of the guidance. Large, plump purple and orange stars are piling up on Baker Beach, China Beach and Lands End as they munch on mussels.

“I was excited to see them,” William Von Eichhorn, a 7-year-old San Franciscan who spotted at least 50 sea stars on a trip to the beach last month, told me. “I just freakin’ love starfish!”

Young San Franciscans may not remember how abundant they once were before “sea star wasting disease” caused massive die-offs along the North American Pacific Coast starting in 2013. The disease, which continues to affect sea stars today, causes lesions, followed by tissue decay, body fragmentation and death. The mysterious epidemic literally melted away the diverse array of colorful sea stars that used to crowd the tidal line causing domino impacts on the kelp, abalone and urchins that also call California’s coast home.

Healthy stars recently spotted on The City’s beaches are a hopeful sign that the worst of the epidemic has passed. But many questions remain, including why sea stars in some areas along the coast, such as San Francisco, were hit harder than others and whether The City’s population is really rebounding. Only one thing is clear: If San Franciscans want our non-human neighbors to thrive, we need to do more than temporarily shelter in place.

“We’re thinking hard about why sea stars have disappeared from some sites and in plenty of sites haven’t disappeared,” Sarah Cohen, a professor of biology at San Francisco State University, told me. “It’s complicated.”

Along with other researchers and students, Cohen has studied different environmental factors that could have led to higher mortality rates in San Francisco’s sea stars. They’ve found some genetic differences. Researchers in California, Oregon and Washington have identified significant die-offs during both warm periods and cold snaps, suggesting stress could be a factor. They’ve considered the diverse and variable amount of pollutants in the San Francisco Bay, and, of course, climate change and its host of effects, including warmer, more acidic water.

But there isn’t one factor that explains why San Francisco’s sea stars were particularly hard hit. In fact, Cohen isn’t even sure if the sea stars people have recently spotted are a sign our local environment is healthy.

The numerous questions researchers are working to answer highlight the complexity inherent in understanding and protecting the environment. It can be reassuring to believe that if humans simply step back from nature, we can make space for plants and animals to thrive. After all, many of us have accidentally shared the recent fake stories of dolphins swimming the canals of Venice and drunk elephants passing out in a Chinese tea garden.

But the reality is that humans may never fully grasp the enormous impact — both negative and positive — we have had on the environment. While San Francisco’s urban sea stars have obviously adapted to some impacts caused by their human neighbors, the combination of pathogens, pollutants and climate change may cause too much stress and make their specific genetic makeup more prone to disease. Creating a healthy environment for the sea stars Von Eichhorn and others “freakin’ love” requires more than a temporary shelter in place.

Although necessary health precautions should stop San Franciscans from heading in droves to the beach to spot sea stars now, Cohen encourages observations once it’s safe. In the meantime, San Franciscans can use apps, such as iNaturalist, to identify and log plants, insects and animals spotted in our backyards and during neighborhood walks. The upcoming City Nature Challenge is also an opportunity to showcase San Francisco’s biodiversity.

“If everyone became a backyard naturalist, that would be a fantastic database,” Cohen told me.

Robyn Purchia is an environmental attorney, environmental blogger and environmental activist who hikes, gardens and tree hugs in her spare time. She is a guest opinion columnist and her point of view is not necessarily that of the Examiner. Check her out at robynpurchia.com

The Umbrellas find an unlikely community in the hardcore scene

The Umbrellas find an unlikely community in the hardcore scene