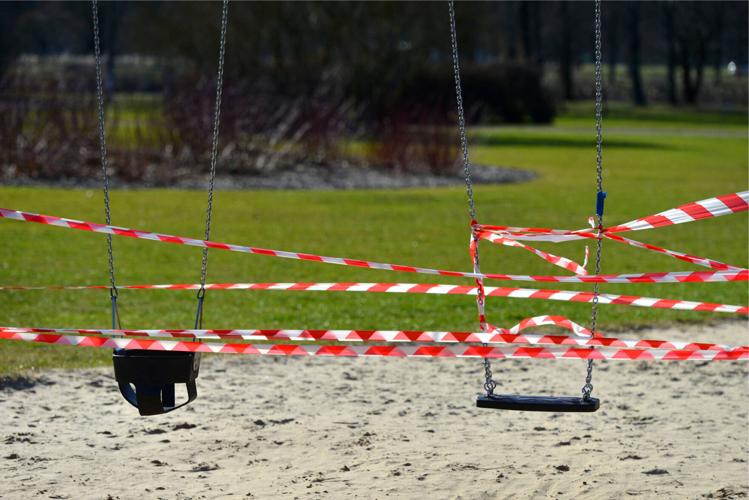 With few options for spending time outdoors staying indoors with a three-year-old is the daily routine during the coronavirus pandemic….

It goes without saying that the past few weeks have been a whirlwind of emotions: fear, isolation and the uncertainty of when/if things will ever be normal again. Based on social media, though, which is the only way to really interact with anyone these days, one of the most pervasive sensations shared by the general public seems to be boredom.

As we enter the third week of sheltering in place, my Facebook and Twitter feeds are inundated with people looking for ways to alleviate the stagnant existence our lives have become while trapped indoors.

Not to diminish anyone else’s experiences, but if you’re bored, consider yourself lucky.

Imagine being stuck in a tiny, cramped one-bedroom apartment with a rambunctious three year old who’s constantly bouncing off the walls.

It starts from the moment she opens her eyes, with a brief respite at naptime, if we’re lucky, until she finally lets me rock her to sleep to Joy Division or Echo & the Bunnymen at some point between 10 p.m. and midnight.

Even before they closed the playgrounds, when we try to take her outside, she immediately gravitates towards other people and touches every available surface and puts things in her mouth. She’s a very active and social three year old. She doesn’t know any better, and has no grasp of the dangers of germs.

Children never – ever – do what you want them to do. I don’t know how people survived with kids during historical disasters like sieges or natural disasters. There’s no way my child would remain chill under adverse circumstances. Like, say, hidden in an attic in the Netherlands. By day two we would’ve been caught and shipped off to the camps.

We keep her indoors as much as possible. A process that has been frustrating and infuriating, for all of us. And definitely not boring.

To take a break from the madness, the wife and I take turns sitting in the back patio behind our building. It’s spring and even though our potted garden has started to bloom and propagate, I’ve had to kill off several plants because our landlady wants us to get rid of most of them.

As a greedy slumlord, she’s always tripping about something. Like the water bill. Since our building is over 100 years old, we don’t have our own meters.

Despite religiously collecting rainwater and developing a system to prevent run off, she sends us these graphs from EBMUD each month that show how the water usage has gone up by a few percentage points over the past three years. Which probably has more to do with a chronic sewage leak. And due to rising rents, apartments that used to have one person now have two. And the units that had two occupants now have three. But she’s fixated on the plants.

So while trying to relax and avoid the harsh reality of our circumstances, it’s impossible to not think about her reaction when we tell her we’re going to be late with the rent this month. It’s highly unlikely she’ll be cool about it.

She already looks at us like we’re pork chops because we’ve been here the longest and have rent control.

In the meantime, as we hope to benefit from the government’s stimulus package, I’m scrounging for money, trying to sell things on eBay and even contemplating driving a taxi again. But there’s not much money to be made these days. Each avenue seems to be a dead end.

None of the grocery stores in my area are hiring and the delivery apps have a long waiting list.

Of course, going out into the world and dealing with the general population includes the risk of catching coronavirus and bringing it home to the wife and kid. Since it’s just the three of us here, how would we be able to take care of each other if we’re all sick?

Every thought seems to lead to more stress. I wish my problems were limited to what to watch on Netflix or picking up a new hobby or just reading books. While my mind is riddled with various emotions, the one sensation I have yet to feel is boredom.

Kelly Dessaint is a San Francisco taxi driver. A veteran zine publisher, he is the author of the novel A Masque of Infamy. His long-running Behind the Wheel zine series was recently collected into a paperback Omnibus, available through all book marketplaces or direct from his blog, idrivesf.com. His column appears every other week in the Thursday Examiner. He is a guest opinion columnist and his point of view is not necessarily that of the Examiner.