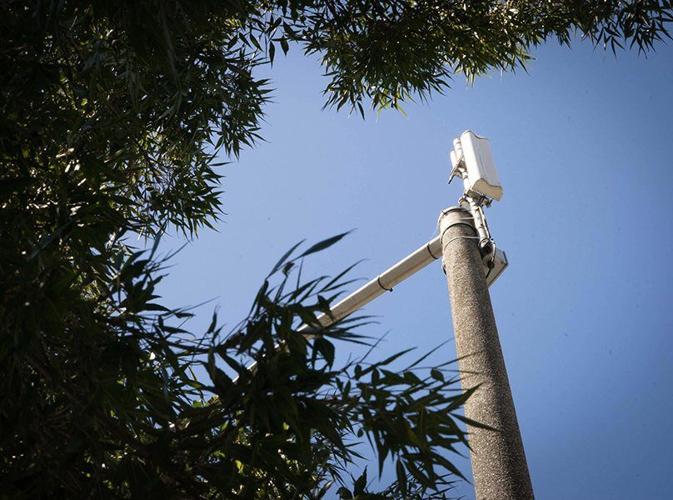 A ShotSpotter, a device that detects and records gunshots, is seen from Turk and Buchanan streets on Monday.

The accuracy of gunshot detection technology used by San Francisco police has been called into question as part of an attempted murder trial of a man accused of shooting at a car full of people in 2016.

While the trial of Michael Reed in connection with a shooting on Aug. 13, 2016 specifically focuses on ShotSpotter sensors in the Western Addition, it raises questions about issues with gunshot detection sensors elsewhere in The City.

Since 2008, the gunshot detection technology has recorded all loud noises and reported the ones thought to be gunshots to San Francisco police, so they can quickly respond.

Paul Greene, a forensic analyst with ShotSpotter and an expert witness in Reed’s trial, testified on Thursday in San Francisco Superior Court about the technology’s accuracy. Manufactured by the company SST in Newark, Calif., ShotSpotter guarantees accuracy 80 percent of the time.

In Reed’s case, ShotSpotter failed to pinpoint the exact location of Reed’s alleged crime near Turk and Buchanan streets, according to Greene’s testimony. In fact, additional analysis conducted after the shooting, at the behest of police, determined the location was about a block away from where it was first reported.

In a broader sense, Greene said the gunshot detection system used by the San Francisco Police Department has not been recalibrated in almost a decade and that ShotSpotter’s guarantee of accuracy was invented by the company’s sales and marketing team.

“Our guarantee was put together by our sales and marketing department, not our engineers,” Greene said.

“We need to give them [customers] a number,” Greene continued. “We have to tell them something. … It’s not perfect. The dot on the map is simply a starting point.”

The accuracy of the system is significant in Reed’s case because police found nine shell casings at the scene, while ShotSpotter recorded 11 shots.

Tong contended that Reed fired in self-defense at someone who first fired at him, hence the extra shots.

However, prosecutor Christopher Ulrich said video and the ShotSpotter recordings showed Reed firing most of the gunshots, while the extra shots were fired by a co-defendant, not an enemy.

Despite the testimony, SST’s CEO Ralph Clark said the technology is better than the guarantee, and SFPD officials were positive about the technology.

The public typically under report gunshots and have little idea where they come from, according to police.

“This technology pinpoints where [gunfire] is,” Deputy Chief Mikail Ali said. “If you’re only relying upon the public, we are significantly under reporting.”

Police spokesperson Robert Rueca said officers respond to all ShotSpotter calls. Still, Rueca would not say how many gunshots are reported each year or if the department verifies their location accuracy.

“It points in the direction to where we might want to go and investigate,” Rueca said.

ShotSpotter, which the manufacturer claims helps reduce gun violence, can pinpoint “precise locations for first responders aiding victims, searching for evidence and interviewing witnesses,” according to SST’s website, which also noted the technology can report the number of shooters and shots fired.

The company’s technology is used by about 90 law enforcement agencies across the country, but some departments have decided to axe the service in recent years.

In 2016, the Charlotte-Mecklenburg Police Department in North Carolina did not renew its annual contract with ShotSpotter because it failed to help them make arrests or identify victims.

In 2012, the Detroit Police Department canceled its ShotSpotter contract because the city had other priorities and not enough officers to respond to reported gunfire.

And in 2014, the Oakland Police Department considered ending their contract for the same reason, but they still use it today.

In 2010, a grant from the U.S. Department of Justice for $1 million paid to expand use of the gunshot technology from 3.3 square miles to 4 square miles, and included new neighborhoods such as Visitacion Valley. It expanded again in 2014 in the Bayview, Western Addition and Mission.

Since fiscal year 2012-13, The City has spent $1.6 million on the ShotSpotter annual contract.

Neither SST nor police would divulge how many sensors are in San Francisco, but Clark said there are about 25 per square mile in the outfitted neighborhoods. For example, during a two-month period in 2009, ShotSpotter recorded 244 gunshots across The City. In 2010, the technology recorded 177 in the same two months.

The system records all loud noises, Greene said. The computer uses at least three microphones to locate the gunshot within a 25-meter radius. Then, at SST’s location in Newark, staff reviews each report to make sure the computer flags only gunshots.

But the technology’s accuracy depends on everything from topography, temperature, humidity and wind speed, as well as the trained ears of employees, according to Greene.

Clark acknowledged the accuracy of the technology is not perfect, nor is their guarantee, but he did say it works.

“The 80 percent is basically our subscription warranty, as you will. That doesn’t really indicate what someone will experience,” he said, adding that it is usually far better.

Despite changes in topography in the Western Addition, from new buildings to taller trees, the 46 sensors there have not been retested since they were first put in, Greene testified last week.

But Clark said the company uses other tools to perfect its system, like customers who notify them of gunshots that were not reported, which they call “missed gunshots.” They also keep track of possibly faulty sensors.

Finally, there are false positives, in which there is a gunshot reported with no evidence of any gunshot.

“We do have a team that analyzes this on a regular basis,” Clark said.

Here's how much tickets to the Warriors' home opener cost

In the social media wars, is Instagram edging out artists?

Here's how much tickets to the Warriors' home opener cost

In the social media wars, is Instagram edging out artists?

Check your email for details.

Submitting this form below will send a message to your email with a link to change your password.

An email message containing instructions on how to reset your password has been sent to the e-mail address listed on your account.

Your purchase was successful, and you are now logged in.

A receipt was sent to your email.

This offer is currently unavailable.