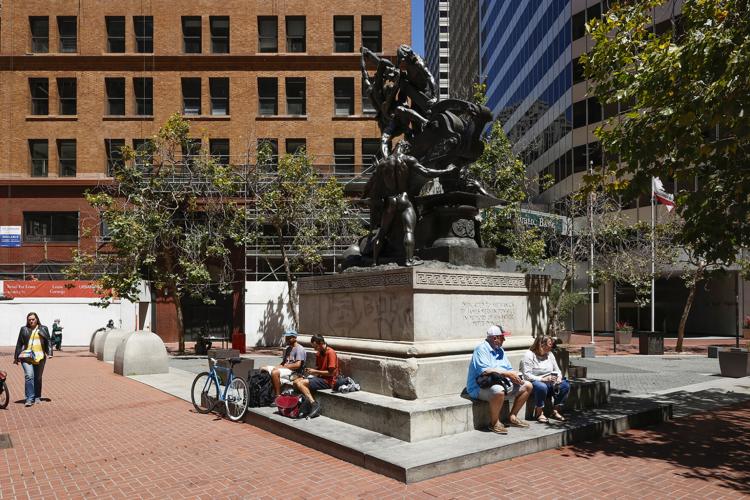 Mechanics Monument Plaza at Bush and Market streets in San Francisco’s Financial District no longer generates the Friday bustle it did before the pandemic, as office workers are still rather scarce. 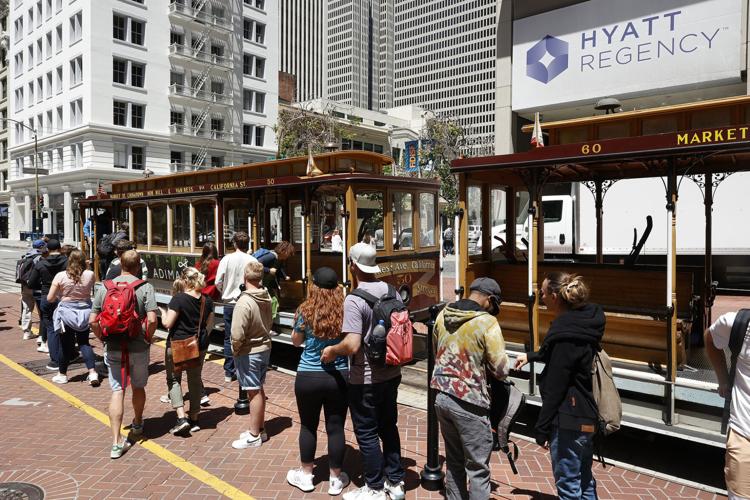 A modest-size group of people wait to board cable cars at California and Drumm streets in the Financial District on Friday.

Mechanics Monument Plaza at Bush and Market streets in San Francisco’s Financial District no longer generates the Friday bustle it did before the pandemic, as office workers are still rather scarce.

A modest-size group of people wait to board cable cars at California and Drumm streets in the Financial District on Friday.

After months of prodding, waiting and hoping for a return to normalcy, business and city leaders are changing course and planning for a future in which downtown San Francisco is no longer a daily hub of tech and finance workers.

The new future they envision is of a downtown that’s less of a concrete jungle and more of a cultural destination; a place worth visiting all on its own, not because your boss makes you.

It’s not so much that they’ve thrown in the towel on working in the office, but leaders like Mayor London Breed acknowledge that “we need to look at every possible creative solution that's going to give us the flexibility we need,” she told The Examiner.

The City should continue to push for filling up office space once again, but also plan for a downtown 2.0, or 3.0, said Rodney Fong, president and CEO of the San Francisco Chamber of Commerce.

“In a weird way we can go on two different, parallel paths (simultaneously),” Fong said.

But in bars like The Treasury, nestled in the Financial District and reliant on its once-reliable foot traffic, it didn’t make much of a difference.

"I don't see how those words they're saying have translated to any success," said Tristen Philippart de Foy said, the bar’s operator.

March was the beginning of a boom, as The City lifted the last of its COVID restrictions. But, by June, there was a “complete drop-off,” de Foy added.

Like other businesses downtown, The Treasury has not seen Financial District workers flock back to the office as envisioned by city leaders after the first omicron wave subsided early this year.

There has been some progress. Kastle, an office security company, has been tracking the return to the office across the nation, and its data shows San Francisco inching ahead of San Jose and Philadelphia after months of languishing in last or second-to-last place.

So while they’re not abandoning all hope for the office, business leaders are increasingly expecting a future in which downtown belongs to more than just the financiers and techies.

Resurgent COVID-19 variants haven’t helped, Breed said in an interview with The Examiner, but she also acknowledged that employees have signaled they want to be able to continue to work-from home to varying extents, “and that is going to be a part of the equation.”

Downtown has been reimagined and rebuilt before.

“It’s a gold rush town. There’s been ups and downs, and San Francisco always reinvents itself, and downtown has as well,” said Laura Crescimano, co-founder and principal of SITELAB urban studio, which developed a new action plan for downtown along with the Downtown San Francisco Partnership last week.

If only transit ridership could surge like the latest COVID wave.

Average weekday ridership on Muni has stalled since April, according to SFMTA data.

BART’s ridership downtown is still less than 30% of its pre-pandemic level, according to a June report on San Francisco’s economic recovery authored by the city controller’s office. The same report documented how office attendance continues to stagnate after a brief surge following the first omicron wave earlier this year.

Anyone who works downtown every weekday can sense it.

On Tuesdays, Wednesdays and Thursdays, one might stand shoulder to shoulder on a bus or train. But on Mondays and Fridays, there’s more than enough breathing room, a consequence of the hybrid work schedule adopted by many employers.

Robbie Silver serves as the executive director of the Downtown SF Partnership and commutes in every day, watching that trend firsthand. His organization has already begun to rethink downtown, and it’s not waiting 10 or 20 years to implement changes.

The Downtown SF Partnership unveiled a “Public Realm Action Plan” last week that laid out scores of proposals to change the downtown landscape that don’t require the monumental investment of, say, converting dozens of offices into apartment buildings.

It’s an attempt to make downtown a destination and give San Franciscans who don’t don a button-up and vest a sense of ownership over the neighborhood. It’s also an acknowledgment that the hybrid, work-from-home model is here to stay, and that downtown can no longer rely on the steady stream of office-bound workers to fill its shops and bars.

The downtown economy has to pivot, and “it has to do it quickly,” Silver said.

Fundamental to the plan is a belief that people aren’t just avoiding downtown out of a fear of COVID. On Thursday, the line to see K-pop group Tomorrow X Together at the Bill Graham Civic Auditorium snaked down Grove Street and around to Larkin Street more than an hour before the doors opened.

A survey conducted by The Downtown SF Partnership as part of the action plan’s development plan backs up that belief, according to Silver. It’ll take more than a low COVID-19 community transmission level to draw people to downtown.

The City is well-vaccinated, Breed noted, and fewer people are dying of COVID-19 during new surges thanks to newly-available treatments. Thus, she doesn’t expect the City to have to return to the days of lockdowns and restrictions.

So if the City won’t backtrack, what’s next?

Conventions are returning, as are tourists. A bit more slowly but, just as surely, more workers will return.

The City has 22,000 employees already full-time in the workplace, which leaves about 12,000 in some sort of hybrid arrangement. The current policy calls for them to be in the office two days a week, but that will shift to three days in a week.

Business leaders would love for Mayor Breed to bring back all city workers tomorrow, Breed said it's not that simple. Employees are represented by labor unions, which have a say in the return-to-office plan.

"If I could waive a magic wand and get everyone to do exactly what I'm doing, which is working out of the office every single day, I would," Breed said.

But what The City can do to hasten the recovery, she said, is understand the needs of businesses and ensure they’re met.

“I don't think it really addresses some of the cost it's going to take to reimagine downtown and start changing infrastructure,” Fong said. “We're talking about a huge investment over six, 10, 15 years of time.”

The City could streamline the dizzying array of permits — opening a restaurant requires more than a dozen — and incentivize businesses to lay down solid roots in the community, Fong argued. Many tech companies, he noted, leased but never bought office space.

“We really ultimately saw the finale result of that - that tech in particular could easily pick up and leave," Fong said.

Each leader interviewed for this story agreed some office space could be converted to residential uses, but noted there are challenges — financial and physical — to doing so.

Asked to predict the future of downtown, Silver, the head of the Downtown SF Partnership, said “being able to waive a wand and flip a switch and create housing is going to be more of the challenge.”

“But I would say for sure that, (on) the ground level, that we see more arts and culture and more hospitality that is driving that new economy that is balancing out this one-use, office district,” Silver said.

But until the new future arrives, the instability remains a constant threat to businesses.

For a bar like The Treasury, a drop in revenue means the bar has to cut back on shifts for some, incentivizing them to look for a more consistent living elsewhere. Tourism, at least in his downtown bar, has “disappeared,” and the area is hampered by the perception that it is unsafe, according to Philippart de Foy.

The pandemic and the slow recovery only add to the challenges San Francisco already confronts in maintaining a profitable business, like a high minimum wage and taxes, Phillipart de Foy argued.

"When you're squeezing already tight margins and getting them tighter, small businesses, cocktail bars, restaurants, they're going to go the way of the dinosaur," Phillipart de Foy said. "We took enough huge blows the last two years. There's only so much of a hole we can dig ourselves out of.”

Fong acknowledges the pain of businesses like The Treasury, but remains optimistic.

"It's an interim phase and I'm pretty sure San Francisco's downtown will come back,” Fong said.