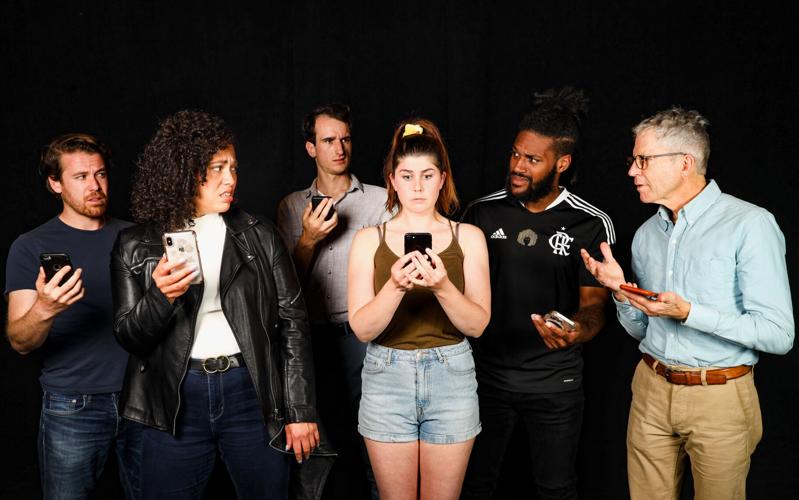 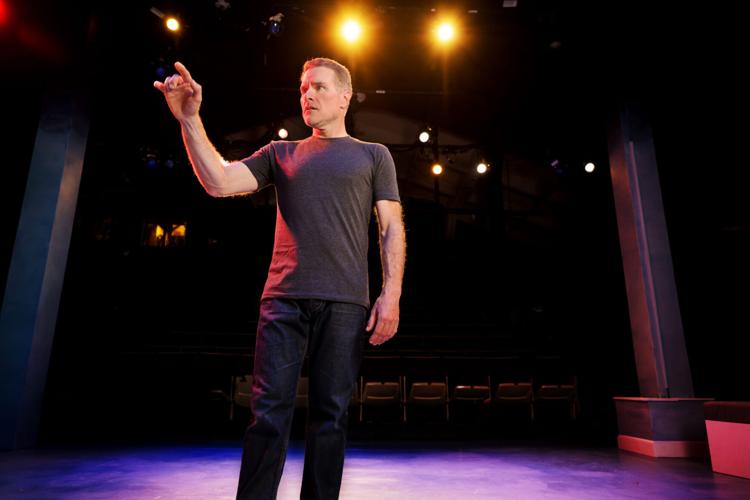 Kevin Rolston stars in “Deal with the Dragon,” the critically acclaimed solo show coming to the Magic Theatre from July 22 to Aug. 13, 2022. 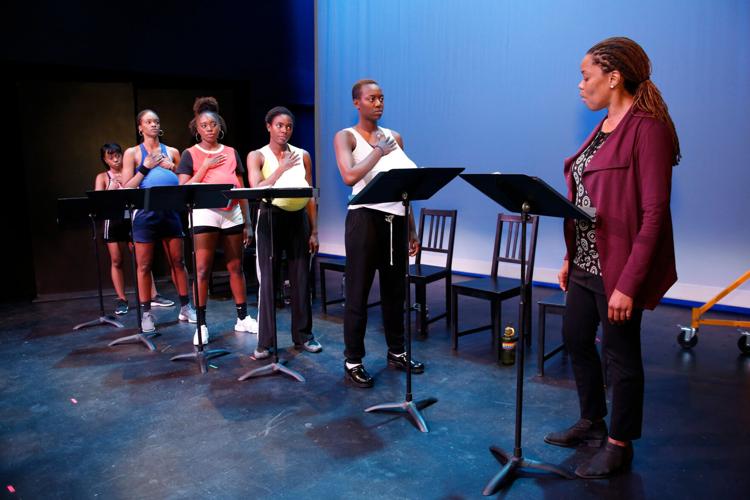 The Playwrights Foundation presents its 45th annual Bay Area Playwrights Festival, returning in person after a two year streaming-only hiatus, from July 29 through Aug. 7, 2022. The cast of Candrice Jones’ “FLEX” performs during the 2019 festival.

Kevin Rolston stars in “Deal with the Dragon,” the critically acclaimed solo show coming to the Magic Theatre from July 22 to Aug. 13, 2022.

The Playwrights Foundation presents its 45th annual Bay Area Playwrights Festival, returning in person after a two year streaming-only hiatus, from July 29 through Aug. 7, 2022. The cast of Candrice Jones’ “FLEX” performs during the 2019 festival.

I’ve always wondered about this play, an Obie Award-winner from 2000, because the title is so, well, strange.

Some of Puerto Rican playwright José Rivera’s other plays have been staged locally and successfully — such as a production of his “Cloud Tectonics” at Berkeley Rep in the late '90s. But what on earth could a play called “References to Salvador Dali Make Me Hot” be about?

As it turns out, the characters are Moon, Coyote, Cat, Martin, Gabriela and Benito — so, definitely not realism here. In writing it, Rivera was hugely influenced by surrealist artist Salvador Dali (specifically, his painting “Two Pieces of Bread Expressing Sentimental Love”) and magical realist author Gabriel García Márquez. Set in Barstow (San Bernardino County), the play concerns a lonely wife, Gabriela (played by Carla Gallardo), who exists in a sort of fantasy world while her husband is away at war.

One review of a previous production suggested it helps a lot to be familiar with the works of Dali —the extravagantly mustachioed 20th-century Catalonian artist — but director Katja Rivera (no relation) says, “I think it’s a very accessible play.”

Everyone in the cast is Latino except for Coyote, which is good, Katja Rivera says, “because he’s kind of an outsider character anyway.” Tango music provides background for Coyote and Cat and informs the movement of the characters in general.

The title of Danielle Evans’ short story “Boys Go to Jupiter” apparently comes from the ditty “Boys go to Jupiter to get more stupider/Girls to college to get more knowledge.”

Be that as it may, the story, selected by Roxane Gay for inclusion in the 2018 Best American Short Stories anthology, sounds like a perfect match for Word for Word. The literary performance company was created by Susan Harloe and JoAnne Winter and boasts an excellent core company of 21, 14 of whom are women. Word stages crystalline short stories verbatim by some of the country’s best writers.

In this one, a white college student (played by Ciera Eis), grieving her mother’s recent death, finds herself in the midst of a racial controversy after a male classmate (Brennan Pickman-Thoon) posts on social media an extremely ill-advised photo of her. The backlash is intense.

Edris Cooper-Anifowoshe, a Word core member, directs a cast of eight, many of whom are new to Word’s particular playmaking style. It’s always fascinating —humorous, surprising, illuminating — to see how the text is distributed among the actors, who sometimes embody inanimate objects. Stories are reconfigured in ingenious ways, but with never a single word omitted. Whose point of view is being represented at any given moment is a directorial choice, with feedback from others, including the actors; it’s a collaborative effort, says Cooper-Anifowoshe. “We have a dramaturg, a roomful of people, a designer. To a certain extent I didn’t create it alone.”

Of Evans, she adds, “She’s a new young writer that I’d never heard of. The story has a real honesty to it, a sort of smart honesty that you don’t (often) see. It’s not trying to do anything to you, just trying to tell you a story.”

‘Deal with the Dragon’

Voted Best of the San Francisco Fringe Festival in 2016 and praised at the Edinburgh Fringe Festival, Kevin Rolston’s hour-long, three-character solo show — about a striving artist who strikes a deal with the devil — is back, with some changes. It’s a “dark, sometimes comic, journey exploring the results of self-destructive behaviour and the consequences of the pursuit of success,” wrote an enthusiastic theater critic in Edinburgh.

Rolston began developing the play at the Marsh in San Francisco, working with director David Ford. “David helped me figure out what I wanted to create and the sort of magic and danger and spark in the air that I needed,” explains Rolston.

He went on to develop it further with director M. Graham Smith, with whom he’s been working in recent weeks to give the central character even more depth and authenticity, “making him a little more knowable.” The process is a combination of writing and trying things out. “I perform, Graham asks me beautiful, insightful questions and either I’ll try it improvisationally or I’ll go back and rewrite.”

Although the fictional artist is desperate to get an exhibit in a prestigious museum — “It’s not MoMa but it’s not not MoMa,” notes Rolston — the playwright is himself not a visual artist, although he and his husband are art lovers and members of several museums.

“Because the play is about shame,” he muses, “when I first began, I thought I was creating this play for an audience of gay men of a certain age or older. But I was limited in thinking about it.” It turned out, to his surprise, that “it’s for anyone who’s ever struggled with the voices in their head.”

The 45th annual Bay Area Playwrights Festival — originally based in Marin and created by playwright Sam Shepard and his longtime director Robert Woodruff — is back live this year after a streaming-only hiatus. However, two of the five plays — chosen from among 240 submissions nationwide and read by 150 judges — will be streaming only.

“We gave options to playwrights,” explains executive/artistic director Jessica Bird Beza, “as to what would serve their process better: online or in person. So it’s about centering the playwright.” (Audiences can watch the two streaming-only plays at home or at on-site watch parties.)

“The power of human connection (is what) resonated in these plays but it’s also what we’re hoping to build with (this hybrid) festival — an in-person community and also a community online,” Beza said.

In general, this year’s submissions tended, thematically, toward exploring human connections, says Beza; writers, she guesses, were processing the trauma and grief of the last few years. “They weren’t all pandemic plays,” she says, “but people working through tough challenges or trauma and looking toward hope. How do you work through that and what does resiliency look like?

“Even a lot of the selected plays,” she adds, “deal with human connection and bonds through challenging times, reflective of what we’re all going through. ... How do you move through that with different subject matters and styles — comedic, dramatic?”

Longtime Bay Area writer and activist Elana Dykewomon — who’s in her 70s and whose “How To Let Your Lover Die” is the first play she’s written — explores love, dementia and the right to die.

Local actor and playwright Denmo Ibrahim’s “An Arab Spring” focuses on two siblings back home in the Bay Area for their father’s burial as they confront secrets and lies within their fractured family.

Iraisa Ann Reilly’s “Saturday Mourning Cartoons” also explores family end-of-life issues — the death of a sister and brother’s sibling, the decline of their abuela (grandmother), the pandemic hovering over the family.

And in Egyptian American playwright Sharifa Yasmin’s comedy-drama “Close to Home,” the lives of a trio of Southerners of differing cultures intersect in meaningful ways.

Under consideration in choosing the five finalists (plus five honorable mentions) is, says Beza Bird: “Who is ready and needs the opportunity? What stories haven’t been heard before? . . . Sometimes it’s not only about what’s the best but also who the writer is and what kind of impact can this have on them in addition to the quality. And what is the unique story that American theater should know about?”