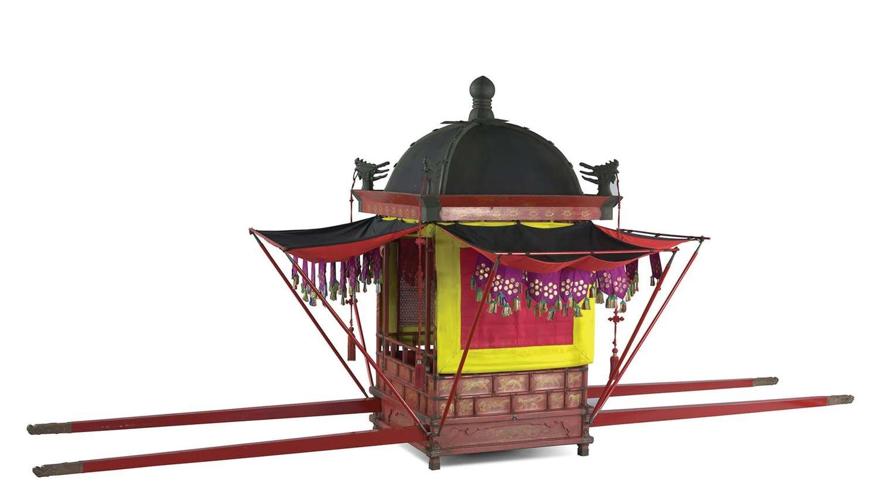 Continuing to make global strides in its attention to Korean art and history, San Francisco's Asian Art Museum presents another landmark exhibition with “In Grand Style: Celebrations in Korean Art during the Joseon Dynasty.”

On view through January, and organized in close collaboration with the National Museum of Korea and the National Palace Museum of Korea, “In Grand Style” is the first major exhibit in the U.S. dedicated to the Josean Dynasty, which began in 1392 and ended in 1910 with the Japanese occupation. The Asian Art Museum is the exclusive venue for the show.

With more than 110 objects, including vibrant paintings, books, scrolls, processional accoutrements and textiles, “In Grand Style” focuses on the culture of pageantry during the Joseon Dynasty — Korea's longest-running Confucian empire — which considered ritual and ceremony the marks of an orderly, sophisticated society.

Lavish processions and banquets commemorating dynastic milestones such as birthdays and weddings were par for the course, and many works in the show are actually plans for and documentations of these sumptuous spectacles. Known as uigwe, or royal protocols, the ceremonial records are highly detailed and beautiful.

At more than 150 feet long, a third of which is unfurled, the scroll “King Jeongjo's Procession to His Father's Tomb in Hwaseong” is an astonishing sight.

Dating from 1795, the scroll depicts the nearly 2,000 people and some 700 horses involved in the milelong procession. The costumed people and horses are hand-painted with minute detail in a charming, cartoonlike style.

Imagine the event brought to life — a task made easy by an animated version of the screen projected on a flat screen in the North Court — and the scroll makes the opening ceremony at the 2008 Summer Olympics in Beijing look like a cakewalk.

Another clever technological component is a touch-screen tablet, provided by Samsung, allowing viewers to magnify one richly detailed painting onto a large screen. It is an example of art meeting technology that is not only effective but dazzling.

One of the most striking works in the show is “Sun, Moon and Five Peaks,” a 19th-century, six-panel, folding screen painting with a bold cobalt blue sky and border, rusty reds, verdant greens and a fantastical blue and white striped river. Frequent archetypes in Korean art, the sun, moon and five peaks comprised the standard backdrop image for the thrones of kings and queens, placing them, metaphorically speaking, at the center of the universe.

Notable events in conjunction with the show include a Korean wedding re-enactment demonstrating elaborate ceremonial nuances of the court and a Korean Culture Day — with free admission courtesy of the Korea Foundation — featuring music, dance, games and an abundance of food.

In Grand Style: Celebrations in Korean Art during the Joseon Dynasty